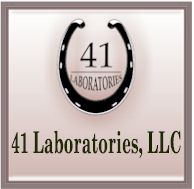 A little history about 41 Laboratories and Sarco41™

R. G. Kekich, a horseman and rancher, gives the following history of the product and the company, 41 Laboratories, LLC, he created to market Sarco41™.

“I’ve been a professional cowboy (PRCA) for a long time, and a contender at the National Finals as a steer wrestler and roper. I’ve had horses and cattle my whole life. I never even knew what a sarcoid was until my rope horse got one when I was in Arizona. He developed a small black bubble, about the size of a pea in the corner of his eye. He’s a dark horse with a freeze brand number 41 and that’s what I named him when I got him.

I brought the horse back to Wyoming when he got the growth by his eye and took him to a good vet who was an old friend of mine, Dr. Ray Smith. He looked at the horse and thought it was a melanoma. Dr. Smith was semi-retired and not doing any vet work anymore so he told me to take the horse to Dr. Ted Vlahos at Sheridan Equine Clinic. He said Ted was a young vet who knew all the new tricks.

So I took the horse to him. I was really upset because I didn’t want it to be a melanoma (which often has poor prognosis). Dr. Vlahos told me it was a sarcoid and easier to treat than melanoma. He suggested chemotherapy and immunotherapy shots and said it would take a shot every two weeks and we’d have to do two or maybe three shots. Dr. Vlahos started giving the horse this regimen of shots and we got up to the eighth week, were ready to give another shot, and the sarcoid blew up and looked awful. It was much worse than when they started.

To best describe a sarcoid in laymen’s terms, it’s like a bear sleeping under a tree. If you wake up that bear, it tries to eat you. A sarcoid may lay on a horse for two or three years, looking like a rough wart. If you decide to take it off, 99 percent of the time the tumor comes back and blows up – and then you’ve got a battle. That’s exactly what happened to my horse.

This horse was only five years old at the time and an excellent rope horse with a lot of potential and I hated to lose him. Dr. Vlahos said we could take the horse to the vet college in Fort Collins to remove the tumor surgically, but told me there was no guarantee it would save the eye.

So, I decided to treat him with an old herbal remedy. I had this formula and it was really good, but I didn’t realize all the things it could do. It’s an old remedy that was called Compound X and a lot of people have used it on themselves. I made up a big batch and Dr. Vlahos and I stated putting it on the tumor every day. Dr. Vlahos could not believe the results. The tumor started shrinking and drying up and within 31 days it was gone. That horse is as normal today as he was when he was born.

The basic ingredient in the product is blood-root. Blood-root is now being tested by the FDA. Researchers are finding that a certain type that grows in mountainous terrain in North America has definite adverse affects on cancer cells. This remedy has been around for generations.

The family I got the formula from lives in Hudson, Wyoming and it was in their family for many years. Two brothers, Howard and Mickey McQuarry, started using it to treat squamous cell carcinomas in cattle (cancer eye). The cancer might eat the eye out, but the herbal treatment would cure the cancer and the eye socket would hair over again. Some years back, I went over to their place and watched them treating cattle. They gave me a small bottle of this herbal remedy – about two ounces. I took it myself when I had an ulcer and got rid of it. Then I used it on a horse that had proud flesh. It took off the proud flesh. I had a calf with pinkeye in both eyes, and the eyes were blind, with bulging ulcers. I put that remedy right in his eyes, and he healed up. I have used this in many ways, and it is phenomenal how well it works.

The FDA wouldn’t let anyone put this compound in human products. The McQuarry’s formed a corporation to try to market it, and the name of the company was Vipont Chemicals. They tried to get the FDA to approve it for human consumption and skin cancer, but they wouldn’t. But they let them put it in a toothpaste called viadent. If you brushed your teeth with that, it would resolve gingivitis and other mouth problems.

Howard and Mickey died and the company disappeared. I was a good friend of the family and I got the formula from Howard’s daughter. I had it for many years and used it for myself, my horses and cattle. I had some skin cancers on the tops of my ears and used this to remove them. I just put a little bit on every day. I had friends who used it on their skin cancers or moles.

We named the company 41 Laboratories, LLC after my horse 41. Our product is called Sarco41™ and is available in 3oz tubes, an 8 oz tub, and in a 250cc Oral Suspension.

We are now marketing our product in 60 countries. We signed a contract in July 2010 with a company in Denmark that will be distributing it around the world. We have been selling a lot of Sarco41™ in Australia, Italy, Canada and other countries.

The good thing about the product is that is has never harmed healthy tissue. If you get it in the horse’s eye, it won’t hurt it.”